These texts outlining the tarot major arcana, with pictures of the Rider-Waite-Smith tarot cards, are especially to help anyone thinking about taking or following a tarot intro workshops or a 10-part course. They are meant to jog your memory, not as a tool to read tarot without study and/or training.

Below is a brief description of the 22 cards of the major arcana of the Rider-Waite-Smith tarot, the best-known and most iconic tarot cards, also the most accessible for beginners. Many contemporary tarot decks are based on these cards. They were published in 1910 and have only just entered the public domain. 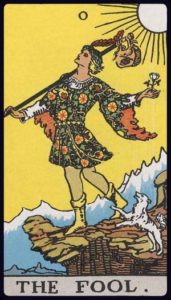 The fool stands for new beginners, for instance of a phase of life or a project. He represents innocence, risk-taking, springtime, youth, defying danger, going for it, the big leap into the unknown. Possible downsides are not paying attention, head in the clouds, foolishness, stupidity , not thinking about the consequences of one’s actions. Or not daring to take that leap, overcautiousness. 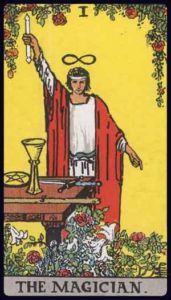 The magician stands for the power and the ability to manifest something, proper preparations, self-confidence, the ability to attract positive energy, cleverness, ambition, assertiveness. Possible downsides are slyness, egoism, manipulation, arrogance, deception, fraud. 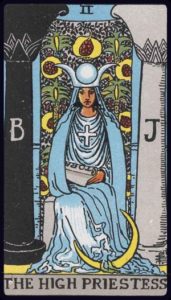 2 – The priestess: ‘Connect with the heavens and open your third eye’

The priestess stands for intuition, the night, ancient times, the ability to contact and pass on spiritual powers, dreams , spiritual journeys, especially the journey through the unknown, alone and without support. She also stands for the third eye or the need to open the third dye. Possible downsides are lack of grounding and a sense of reality. 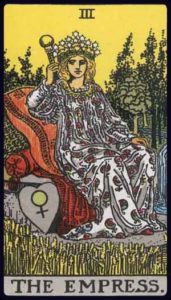 The empress stands for fertility in the broadest sense. She is the great mother of all life on earth. She is also mother in a figurative sense, e.g. someone who takes on a mother role, who births something like a project or a work of art.  She is caring, productive and powerful. She is often associated with the world of nature, but she governs all elements and all life processes on earth. The card sometimes indicates literal pregnancy. As possible downsides she may be overprotecting and overbearing. 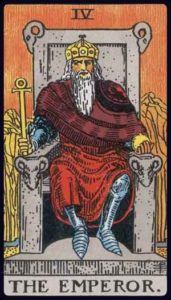 The emperor stands for steadfastness, perseverance, structure,  the power of rational thought, discipline, focus. He creates a framework, a structure for the outpourings of the empress. A protective strength, which helps take control of a situation. His possible downsides are stagnation, injustice, an excessive desire to impose his own will, a lack of empathy and a lack of tolerance for what he sees as a weakness. 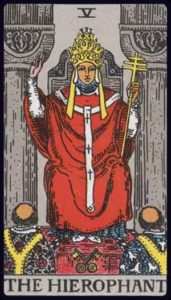 5 – The hierophant: ‘Respect for knowledge’

The hierophant stands for tradition and conventions, established knowledge. He is a priest, a teacher, coach, counselor, someone vast areas of knowledge, especially of religious matters, someone who can give guidance. He also stands for marriage because he is competent to perform a wedding ceremony.  He brings people together and guides them on the path to esoteric knowledge and know-how. The card can indicate a need for guidance. His possible downsides are a lack of flexibility, an in ability to see things from different perspectives, self-righteousness. 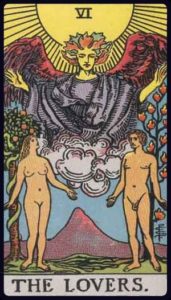 The lovers card stands for partnership, and/or a decision to make a commitment. It often points to a romantic partnership, but another kind of committed partnership is also possible. The lovers card indicates dedication, devotion, long-term love, friendship. Possible downsides may be indecisiveness, lack of boundaries and codependency. 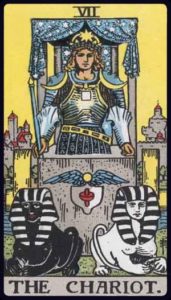 7 – The chariot: ‘Victory is within reach’

The chariot stands for taking control of the different forces in your life and combing them to a single driving force, for discipline, triumph, the ability to find and walk your true destiny, led by your guides in accordance with your higher power. On a more everyday level the chariot also stands for travel, movement, departure, leaving. In a negative sense the inability to manifest your destiny or failure to succeed in your life’s mission. 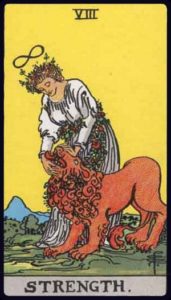 Strength stands for physical, emotional and/or spiritual strength. It may also represent sexual energy.  In the latter case it stands for control of one’s own body and its forces and currents, intimacy with our animal nature and harnessing the power of sexuality. Possible downsides are weakness, unbridled lust and recklessness. 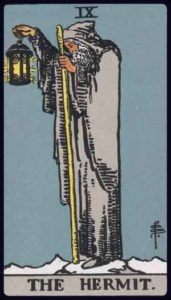 The hermit stands for solitude, withdrawal, introversion, the discipline to act independently and produce something without the support of others. The search for inner wisdom and knowledge, for the light in the darkness. The card can also indicate a need for me-time or on the other hand, loneliness and/or abandonment. 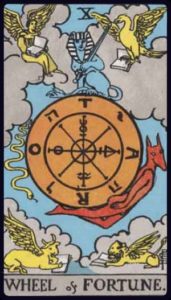 The wheel of fortune stands for varying good luck and bad luck, but generally indicates good fortune. It also stands for the ups and downs of life and how to deal with them, finding the quiet in oneself in the midst of continuous change, for flexibility and optimism. Possible downsides are pessimism and too little grounding to let go and go with the flow of life. 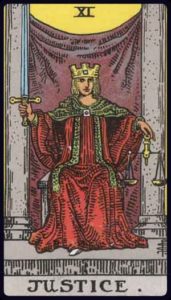 11 – Justice: ‘What goes around comes around’

Justice stands for cause and effect, the principle of the good, but also the bad that you do always coming back. Punishment or reward. Karma. Bringing balance into a situation. The possible downsides are an inability to accept being wrong, or being too judgmental. It can also mean a score being settled. Often points to a court case or other legal proceedings. 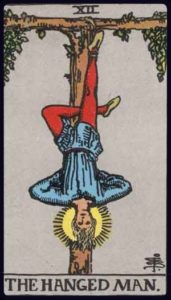 The hanged man stands for surrender, sacrifice, looking at things in a completely different way, expansion of consciousness, waiting it out, being forced to be patient, dealing with the unknown. Possible downsides are prolonged waiting, an uncertain outcome, hanging in a vacuum, martyrdom, victimhood. 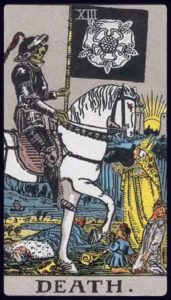 The death card stands for a definite end. Almost never for actual physical death, but for the end of a job, project, relationship, etc. Death also stands for a total, radical transformation, whereby much must be surrendered to make way for the new. In some respects, the card can also mean indicate a blessing, when a negative situation is finally cleared. The recommendation in this case is to embrace death, as resistance can lead to stagnation. 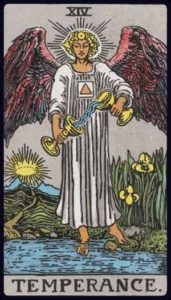 Temperance stands for the search for balance between extremes, and balancing opposing parts of the personality and soul. A process which may be guided by the spiritual world, the life’s work of the soul on earth. Possible downsides may be lack of balance, lack of harmony, chaos, refusal of spiritual assistance, continuous movement between extremes. 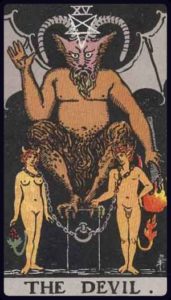 The devil stands for addiction, obsession, identification with materialism at the expense of the spiritual world, codependency, violence, abuse, deceit, etc. The devil also invites us to self-reflect and obtain self-knowledge, and to recognize that we are often our own worst enemy. He challenges us to see ourselves as we really are. Ultimately, besides bondage, he also stands for freedom. The devil laughs at us. 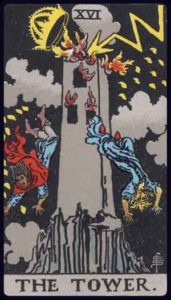 The tower stands for the collapse of an aspect of life in a drastic and unexpected manner. The total unexpected loss of a job, a relationship, a life-threatening illness, war. It can also indicate a sudden accident. The tower furthermore points to the need to let go of arrogance, an inflated ego or false ideas about the self. Unrealistic and hopeless assumptions, beliefs and principles may need to make space for aims and values more in line with reality. 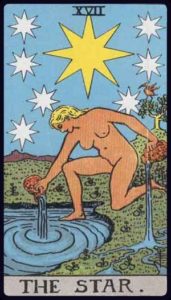 The star stands for hope, optimism, reaching out to the heavens, opening up to the blessings of the spiritual world, connection with the universe. It may also indicate spirit reaching out to the individual. Possible downsides are hopelessness, despair or misplaced optimism and failure to take earthly reality into account. 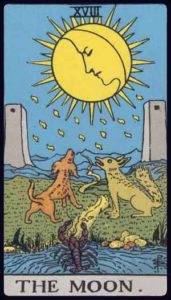 The moon stands for the unknown, for cycles, the subconcious, the primitive brain, our instinctive, animal nature, the evolution of the planet and ourselves, fear, mystery, the underworld, our shadow sides. In divination it may also indicate secrecy, concealment or even deceit. 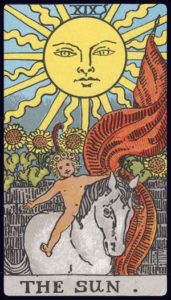 The sun stands for a clear mind, happiness, joy, playfulness, the sweeping away of everything that is dark and murky, for classification and organisation, for reason and rational thought, for childhood, youth, for bright light. Possible downsides are unreasonableness, an inflated ego, the desire to always be at the centre of attention. 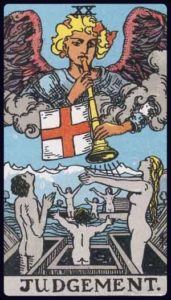 Judgment stands for waking from a deep sleep, enlightenment, figuratively rising from the grave, an evaluation of our life here on earth, leaving behind that no longer necessary to start a new life.  Possible downsides are a weak connection with the here and now, a desire to leave this earth without learning the necessary lessons, escapism.

21 – The world: ‘Celebrate your achievements’

The world stands for achieving a balance between the different parts of the personality that enable contact with more advanced spiritual spheres. The journey on our way to the spiritual sun, wholeness, joyfulness, reaching a relative state of self-realisation after going through many trials. Possible downsides are arrogance and a lack of humbleness.