Musings on the fool’s journey and other tarot pathways

The Fool’s Journey is the symbolic journey made by the very first card of the Tarot Major Arcana, the Fool, through all the cards of the major arcana to arrive at the World card at the end. Not all tarot readers relate to it, or have it play a role in their practice, although most will be aware of its existence. It maps the journey made by the fool through archetypal universal experiences and encounters during a human life, overcoming different challenges and obstacles, progressing and growing in strength and authenticity, ultimately leading to personal transformation and spiritual evolution. The Fool’s Journey gives the tarot credence as a spiritual system, raising it above its status of a pack of cards with humble origins as a game of chance.

When I’m reading Tarot, I don’t generally have the Fool’s Journey in mind. I am most aware of it and may communicate some information about it when reading the Fool and the Magician at one end of the spectrum and the Judgment and World cards at the other. When reading for clients, if the Fool comes up I may explain that the Fool is just setting out on their journey, that they are leaping into the unknown because they are going where no one has been before. If there are indications of a spiritual journey, I may refer to a pilgrim on his path. I may talk about the Magician being well-prepared for what lies ahead. And I might touch on the evaluation of the old life and an awakening to a new life that the judgment card holds and the elevation of the dancer in the world card to expanded realms of being, finally after a long journey.

Other than these, the Fool’s journey is not generally on my mind when I’m reading for others, and I don’t think it would be necessarily helpful in many cases to involve it. But I do find it helpful to dwell on it when studying the majors, their interconnectedness and progression as a way of getting more information from the cards, prompting them to open up and show more aspects of themselves.

I spent some years studying the Tree of Life of the Hermetic Kabbalah and the tarot card positions on the pathways between the spheres.  Long enough for the pathways and cards to work their way into my subconscious and become locked there for future reference, adding indelible extra dimensions to my understanding of the Major Arcana.

Hermetic Kabbalah Tree of Life with traditionally placed major arcana tarot cards on the paths between the spheres: 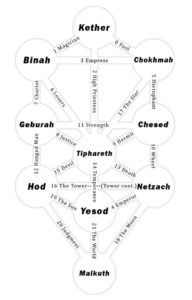 However, when looking at what could also be described as the Fool’s journey on the Hermetic Kabbalah Tree of Life, some problems come up. The dilemma in a nutshell is this: in the Tarot the Fool gradually travels from card to card to end their journey at the World card, spiritual graduation and evolution. But on the Hermetic Tree of Life this is the pathway directly leading to the sphere of the earth, Malkuth. So how to reconcile this downward spiritual journey of the Fool on the Tree of Life ending at the doors to Earth, Malkuth,  rather than at heaven’s doors?

This is further complicated by the fact that in the Hermetic Kabbalah, the Seeker’s journey starts at earth and moves upward along the various paths upwards towards the source of all. In this case, the Fool is not the first, but the last card encountered on the journey. I got round this though by realizing that because the Fool is actually unnumbered, might he not as easily start his journey at the end of the Tarot, after the World card and work backwards? Is it not precisely the Fool’s freedom to move that means that his starting and end point are not set in stone?

But comparing the different imageries that spoke to me the most on the Tree of Life was still challenging. Besides the image of the Fool near the top of the Tree, stepping off the cliff into the journey of life, there’s the Empress, close to the source at the top of the tree, opening the gates to creation of the energies to make up our universe, our world. Both these cards and the directions they are envisaged moving in would entail the Fool journeying from the top of the tree to the bottom.

The Priestess however is a different matter. I have always learned to visualize the Priestess as moving up the tree the other way, her long trek across the desert abyss, her only source of sustenance and company the camel at her side, on her mystic journey that started at the sphere of earth, Malkuth, and is now taking her from the centre of the tree, Tiphereth, up to meet her maker, the source in Kether. I think that perhaps one of the biggest reason the Thoth cards are so dear to me is the tiny camel at the bottom of the Priestess card, absent in Rider Waite Smith, symbolic of her spiritual journey, reflected in the Hebrew name of the path, Gimel.

In the same way, I have grown to envisage the World card as the first card leaving Malkuth to Yesod, the sphere of the Moon, so an upward rather than a downward journey. In meditation and flights of fancy we rise, our imagination soaring, our minds taking us beyond your usual mode of perception, into the astral worlds. The dancer on the World card, naked save a sash, who has incorporated the lessons of fire, water, air and earth and lifted them to their highest state, the winged creatures signifying their apex, is working her way up the tree, moving upward from Malkuth to Yesod.

So can I also let the Priestess move downwards from Kether to Tiphereth, and the dancer downwards from the sphere of the Moon to Earth (from Yesod to Malkuth)? To my surprise I found that actually, yes, I can. When I start freeing up my mind, I see that the Priestess can equally cross the dessert from Kether to arrive at Tiphereth, the realm of harmony and sacrifice. And the dancer can equally dance her way down, into the world.  With some effort I can also imagine the Fool falling upwards into unity where he loses the last vestiges of his form, with the same playful leap of courage as he takes the step into this world.

Expanding on this, I realized how limiting my fixed notions about the journey moving downwards or upwards were, and how wrestling with my dilemma was actually a tool of liberation, a typical Tarot theme featured in a number of cards.

For a start, the Kabbalah describes much more than a spiritual journey. The kick-off point at Kether (or actually before Kether at Ain Soph Aur, the stage prior to any manifestation at all), down to Malkuth, for instance, represents the creation of the universe ending with our earth. On a much smaller scale, for instance, it may represent the inception of a new idea and its journey to its final manifestation.

But besides this, allowing the seeker’s journey, or in other words perhaps the Fool’s Journey, to move both up and down the tree set me free. I now see the journeys in both directions as spiraling, moving round to start anew, turning inward and outward rather than linear pathways with a set goal. And the Fool, who takes on the role of the dancer when approaching earth/Malkuth, creates a new meaning for themselves as the journey back recommences.

As in any reading, how I read any card in relation to the Fool’s Journey depends on context, the surrounding cards, etc. etc. Is the priestess travelling across the desert to take on a more material form, is she on an adventure to take on human form, or is she increasingly leaving her human form behind, travelling through the subtler energies of the upper realms? She could be doing either, and any of this and more is naturally within her scope of action. The ability to move from one state of density or subtly to another must necessarily be part of the attainment strived for by these archetypal energies.

The final question is, are we spiritual beings involved in a lifelong process of integrating into the realm of earth and learning all the lessons it has to teach? Or are we earthly beings striving to integrate ever greater spiritual realms into our being and learning their lessons?

Or are we both simultaneously? 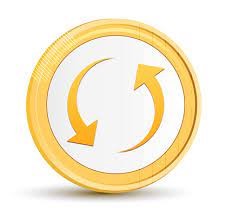